Your Guide to Understanding Energy Deregulation

Deregulation is a complex subject. Join us as we look at the pros and cons of deregulated markets and how they affect pricing for residential customers, the wholesale market, and energy providers.

What Does Deregulation Mean?

Deregulation involves the removal of restrictions or regulations, usually in a specific industry. It often applies to government-run industries opening up to the competition in the form of private companies.

How Does Energy Deregulation Work?

Regulated energy markets have a utility company responsible for electricity (generation) or gas (production), transmission, and distribution. This local utility, usually covering an entire state, is essentially responsible for every step of the energy market, from creating energy and maintaining wires to getting power to the customer. About one-third of U.S. electricity demand is met via regulated markets.

Confusingly, some regulated markets’ utilities are not state-owned. They are private companies called investor-owned utilities (IOUs) that act in the same way as public utility companies. Very few publicly-owned utilities (POUs) own their transmission or generation capabilities.

Deregulated electricity markets and natural gas markets break up any local utility’s monopoly, allowing energy companies to compete for contracts to supply various parts of the supply chain. With gas, the local utility company takes charge of some steps.

These are the main supply chain areas that companies compete for:

In deregulated states, gas and electric companies bid to run various parts of this process. Customers can choose a retail energy supplier — also known as an alternate supplier or ESCO — and pay their local utility for energy transmission and distribution. Choosing your electricity provider could save you money on your energy bills because you have more options. These retail electricity providers are also known as REPs.

Independent power producers (IPPs) are privately-owned power plants that generate electricity to add to the national grid at the generation point. They generate renewable and nonrenewable energy.

What Is Deregulation of Energy in the United States?

Deregulation of energy came about in the United States for a variety of reasons. A key component was the rapid increase in energy prices in 1973. OPEC countries stopped exporting oil to the U.S. (and other countries) that relied on oil and gas to meet rising energy demands. Supply levels crashed, and prices rose rapidly during a nationwide energy crisis.

The country also suffered power blackouts and outages, prompting incoming President Jimmy Carter to prioritize energy supply upon taking office in 1977. Then, on November 9, 1978, the Public Utility Regulatory Policies Act (PURPA) was passed. IPPs were allowed to start operating, and the new law and energy plan set the U.S. on the path to restructuring the energy industry. The National Energy Policy Act was approved in 1992 to further this journey.

FERC, the Federal Energy Regulatory Commission, was established in 1977 to regulate the transmission and wholesale sale of electricity and natural gas across states. Using PURPA legislation, FERC would also regulate oil transportation by pipeline, promote energy conservation, and ensure the best customer rates, among other aims.

For every deregulated state, the Public Utility Commission (PUC) helps to monitor and regulate electric utilities. Without effective legislation, critics fear that private companies could raise prices without recourse for customers who depend on the service.

Does Deregulation of Energy Work?

The question of whether deregulation works is a thorny one because it depends on how you view deregulation. Some think governments should own essential infrastructure in a regulated market. Others feel deregulated is better for customers and businesses, and that the government’s role is supervisory rather than holding a monopoly market position.

Many energy companies and energy suppliers have made profits on their investments and procurements in the U.S. energy market. It’s probably fair to say that deregulation works for most of them, otherwise they wouldn’t enter the market.

Perhaps the significant gauge of success is how energy deregulation and its promise of choice, lower pricing, and better service have worked out for customers. Let’s take a look at the numbers.

The U.S. Energy Information Association (EIA) says there are 13 states plus the District of Columbia with residential retail choice programs. Michigan, Oregon, Virginia, and Nevada have a limited retail choice, predominantly available for non-residential customers. In Texas, choosing a supplier is mandatory — if customers do not select one, then the state-operated ERCOT council assigns them one.

Overall, there has been a minimal reduction in deregulated electricity prices, but not in every state. Also, many customers do not exercise their right to choose their supplier. In this sense, deregulation has not dramatically changed the overall market.

What Is the History of Deregulated Energy in the United States?

It took many years for the United States to partially deregulate its energy system. Here’s a brief timeline of the significant events.

NERC 1968: NERC is the North American Electric Reliability Council and not a law. Its creation was a response to the United States’ second-largest blackout in November 1965, when 30 million people lost power (the largest was in 2003 when 55 million people were affected). The NERC split the U.S. energy map into nine regional organizations. It aimed to improve the national grid’s power transmission reliability. Today, there are eight zones, and the NERC is called the North American Electric Reliability Corporation.

EPCA 1975: The Energy Policy and Conservation Act of 1975 was Congress’s reaction to the 1973 oil embargo and price crisis. It aimed to keep supplies high and demand low through various means: increasing domestic supplies, restraining overall energy demands, and being better prepared for emergencies. Its overarching mission was to keep energy rates at a low level.

The Energy Policy Act (EPAct) of 1992 is fundamental to energy deregulation. It looked to increase U.S. energy independence, once again promoting energy conservation and renewable energy sources. More significantly, it gave all electricity suppliers access to the U.S. national grid and allowed wholesale market competition, tearing up restrictions from the 1935 PUHCA.

There have since been many acts offering amendments — covering everything from legislation to safety — and regulated and deregulated markets must follow the same standards. The 2005 Energy Policy Act covered the entire country, for example. It addressed greenhouse gas emissions, making loans available to encourage renewable energy production and increasing gasoline biofuel.

What Is a Deregulated Market?

A deregulated market is one where regulations and restrictions are removed to allow greater competition. This usually happens when a government-run industry such as water, energy, or even airlines and telecommunications, opens up for private companies to run.

Deregulation is also known as privatization or outsourcing. Well-known examples in the United States include the medical industry, sections of the welfare system, education, and prison services.

What Was the Result of Deregulation of the Electric Power Industry?

The result of deregulation depends on which state you live in. In general, there is now:

What Is the Main Source of Power in the World?

What Are the Deregulated Energy States? 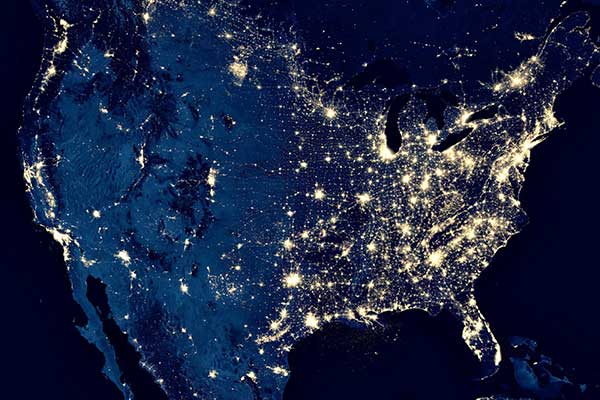 The 17 energy deregulated states in the United States are:

Why Is Deregulation Important?

Some people see deregulation as essential on social and economic levels and to provide choice for customers.

Government-owned utilities have a monopoly on services. Critics argue this stifles competition, innovation, and growth, all of which could lead to lower prices for customers.

Those against deregulation maintain that certain vital services should be in public hands and not under private company control. Whichever a country or state chooses, it is clear that strong legislation is required to protect customers in regulated and deregulated markets.

Any Other Examples of Deregulation?

Some famous examples of deregulation in the United States include:

Is Energy Deregulation Here to Stay?

If you were to talk to people in states both with and without energy deregulation, you would most likely find differing viewpoints about the pros and cons of each.

One of the deregulated energy market’s great ironies sees energy suppliers constantly pushing for cheapest cost prices while customers sign up for best-value fixed prices. Many people are pleased with this arrangement as long as they can save money, accurately estimate their bills, and switch suppliers if prices rise.

People in regulated markets have little choice and have to live with the prices they receive. Many will point out they are happy to pay more to keep public ownership, believing such grand infrastructure should be in the people’s hands rather than those of private companies.

One thing’s for sure: If you do live in a deregulated energy market state, it’s well worth looking around for the best energy plan for your needs.