8 Solar Energy Pros and Cons that Might Surprise You 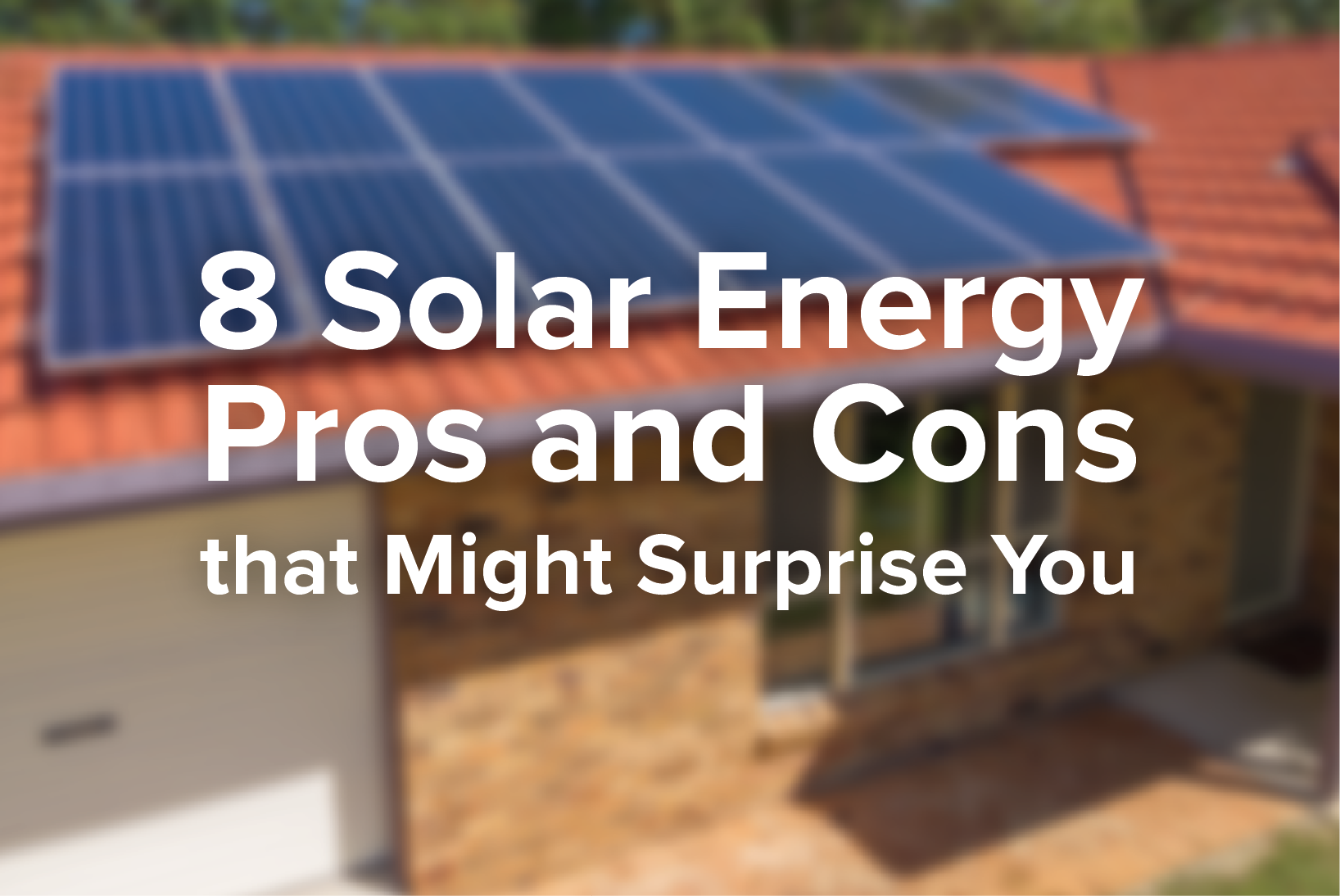 Everything has pros and cons—even solar energy. Curious what could possibly be wrong with something that produces cleaner energy and lower electric bills? Well, you might be surprised. (Don’t worry, the pros outweigh the cons.) Read on to discover eight important advantages and disadvantages of solar energy.

As of 2016, solar energy accounted for about half a percent of total energy consumption in the US, which is unfortunate because solar power happens to be one of the cleanest types of renewable energy currently available. In fact, manufacturing aside (more on that below), solar panels emit no greenhouse gases. To put that in perspective, in 2016 alone, coal power made up about 16 percent of total US energy consumption and produced roughly 18,016,841 metric tons of CO2.

Tax credits are among the many state and federal financial incentives that support the growth of residential solar. Details surrounding tax credits and other programs vary from municipality to municipality and from state to state. One helpful online resource to see which incentives are available in your hometown is the Database of State Incentives for Renewables & Efficiency® (DSIRE®), which lists current solar-power-related incentives and more.

Residential solar energy allows homeowners to benefit from lower electric bills in one of two ways. In most cases, when you own your solar panels, your bill will be significantly lower and you may even get energy credits from your electric company where net metering is legal.  If you lease your solar panels (solar PPA), the leasing company typically issues you a lower electric bill every month. Either way, your monthly bill will most likely be cheaper.

Ever get the hankering to live independently off the grid? Well, residential solar panels can help you do just that. In fact, they can be particularly handy in remote areas where civilization (i.e. an electrical grid) is hard to come by. Sound kind of alluring but still a little scary? If you want to try out living off the grid before you commit to moving your entire home and family, there are a ton of solar-powered survival and camping gadgets to help you test the waters and become more self-sufficient right now.

Perhaps the number one disadvantage of residential solar power is the upfront cost—and for good reason. When you purchase a home solar power system, you’ll most likely pay somewhere between $15,000 and $40,000, depending on the type of solar panels and the amount of your down payment. There is, however, a way around fronting a ton of cash and that’s by leasing your solar panels (solar PPA). For as little as $0 down, you can get home solar for a lower monthly price than your typical electric bill.

Given that solar energy doesn’t require burning carbon-based fuels, you may be wondering why its environmental impact could be considered a disadvantage. As we mentioned above, solar panel manufacturing and placement may negatively impact the environment. Solar farms, for example, can take up between three and a half and 16.5 acres for every megawatt produced—which can ruin habitat and increase pollution in the surrounding area. More importantly, the mining of metals and use of other toxic chemicals during the manufacturing phase can harm the environment beyond repair.

As much as solar energy technology has advanced in the last half century, it still has a long way to go. Most solar cells, in fact, only convert sunlight at approximately 25 percent efficiency, while the world’s most advanced solar cells only boast an efficiency of around 45 percent. Couple that with complications associated with energy storage, and you can see why solar energy stands to gain a lot from technological improvements in the years to come.

The last major disadvantage associated with solar energy doesn’t necessarily affect everyone: lack of light. If you live in a place that gets fewer hours of daylight or sunshine, your solar energy production will be negatively affected. Likewise, if air pollution and heavy smog are a common occurrence in your hometown, your panels won’t produce as much energy as they might otherwise. In either case, chances are you’ll still get lots of power from your solar panels–you just won’t be 100 percent energy self-sufficient.

Looking at the pros and cons we’ve outlined here, no matter what its imperfections, we hope the value of solar energy is clear: it’s cleaner than fossil fuels and more affordable than ever. Want to know more?

Keep up on everything from DIY solar panels to renewable energy news on Powerline.