Power Outage Guide: Tips, Causes, What To Do, and More 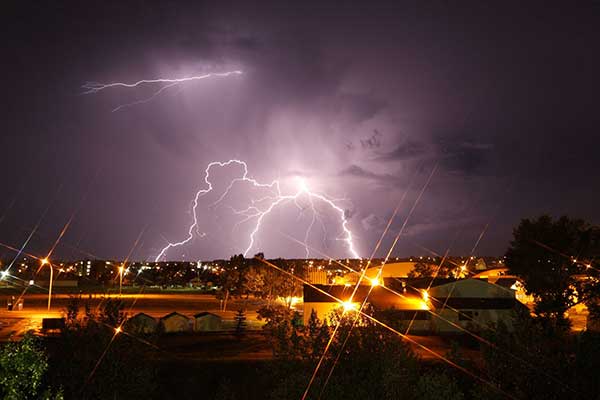 Be it weather conditions, equipment failure, or a wild turkey, power outages are disruptive wherever and whenever they happen.

Weather-related major power outages in the United States were up 67% between 2000 and 2019 and climate change may further exacerbate the trend. While a short outage can be mildly irritating, longer or rolling blackouts can have dire consequences.

Use this power outage guide to discover everything you need to know about them, including why and where they happen, how long they last, and why squirrels don’t seem bothered at all.

What Are Power Outages?

A power outage has several names: power cut, power blackout, blackout, power failure, and power loss are some of the most common variations. Whatever you call it, a power outage is the loss of electrical power through a network to customers.

In simple terms, a power outage is when the electricity in your building stops working because there is no power. A short outage is often a small inconvenience while more prolonged outages can cause danger to the environment and public safety, plus bring billions of dollars of damage.

How Long Do Power Outages Last?

The United States has almost 155 million electricity customers with more than 3,000 electric distribution systems. In 2019, customers experienced an average of around 5 hours of electricity interruptions, fewer than 2018’s six hours and 2017’s record of almost eight hours per year.

Major outages can last much longer, such as this year’s winter storm in Texas that claimed at least 111 lives and left millions without power for days.

Excluding major events, customers experienced an average of 1.5 hours (92 minutes) of disruption in 2019, which is relatively consistent with previous years.

It’s always a good idea to prepare for power outages, especially when there’s no guarantee of a fixed power restoration timetable.

The leading cause of power outages in the United States is the weather. High winds can bring down power lines, as can freezing rain, heavy snowfall, ice forming on power lines, and lightning damaging equipment.

These storms can bring down trees, which in turn damages power lines, and bring floods that can disrupt parts of the electrical grid. Heavily-forested states like Maine and West Virginia have frequent outages because trees often fall onto power lines.

There are around 160,000 miles of power lines in the United States. Natural wear and tear of cables, connectors, transformers, and switches can cause power outages, too.

Workers and homeowners can also accidentally cut power lines, sometimes digging through buried cables, and traffic accidents can knock the supply. Residents in the Florida Keys were less than pleased when a sailboat hit a power line in Tavernier, outing the power for 90 minutes.

Utilities occasionally plan outages so they can carry out maintenance. They advise customers beforehand and usually give an estimated time when electric power will be restored.

Wildlife wreaks havoc sometimes, too. A wild turkey flew into Sonoma County’s power lines in California, crippling its 911 dispatch system, county courthouse, and jail for a day, and sadly baking the bird.

Some 600 customers in Union City, Tennessee, lost power for an hour when two serpents slithered into a substation, causing a blackout, one of many strange power outages in 2019.

What Are Some Recent Power Outages in the United States? 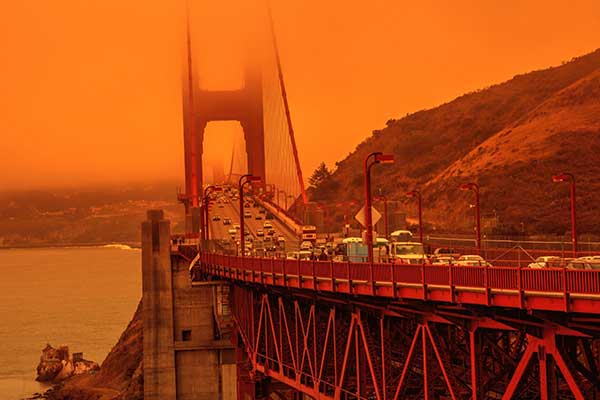 The East Coast suffered large-scale power outages just before the California problems. Category One Hurricane Isaias had been downgraded to tropical storm status when it hit New York City on August 4, 2020. However, Isaias still managed to leave 257,000 people without power, including areas of Manhattan.

How Many Power Outages Happen a Year?

The number of annual power outages depends on which state you live in. Between 2015 and 2019, Maine led the way with 3.9 outages a year, followed by West Virginia with 2.8 per year.

Outage duration is important to note. In the same date range, Florida had the highest average outage duration of 14.6 hours, with Maine next with 14.1 hours. As Maine residents will no doubt attest, they suffer the most frequent and some of the most protracted power outages in the United States.

The least amount of outages were in the District of Colombia, with 0.7 outages per year, and then three states with 0.8 outages per year: Wisconsin, Utah, and Massachusetts. All four of these states have some of the short outage durations in the U.S., between 1.5-2.2 hours.

Some power outages are predictable. For example, suppose a utility company is carrying out maintenance to the power grid. In that case, they contact customers in advance to advise them of the outage time and duration.

Many utilities, along with associated press outlets, warn people of power outages when inclement weather approaches. No one can accurately predict where an outage may occur, but informed citizens can prepare for their possibility.

Ever wondered why your light bulbs sometimes flicker momentarily? These are short power outages, and they occur because of short circuits in the grid. A short circuit happens when an object briefly comes into contact with power lines, perhaps a tree limb blowing in the wind.

When a short circuit occurs, a breaker interrupts the power flow. This safety device tries to clear the line a few times to return power. The breaker is an essential feature, especially if the shorting was caused by something that moves away, such as a tree limb.

How Much Ice Causes Power Outages? 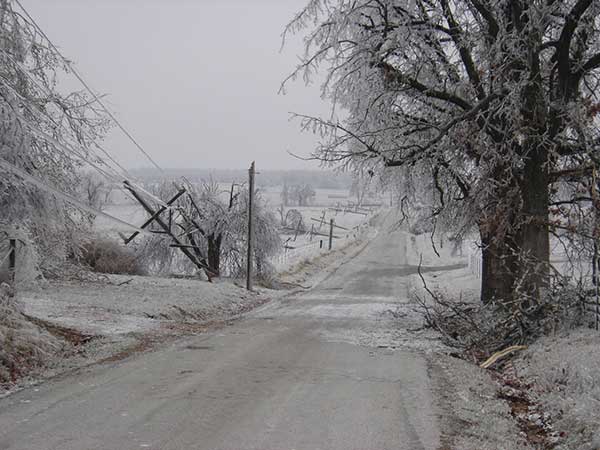 Ice is a big problem for power lines and maintaining electricity supplies, especially if coupled with high winds. The extra weight on tree branches also increases the risk of the branches falling and causing damage.

Anything over 1/4 inch of ice can cause problems and power outages during storms.

It’s vital to report power outages as soon as they happen. Utility companies need as much information as possible to locate and repair the outage source in the quickest time.

How to Report Power Outages?

Some states have several Transmission and Distribution Service Providers (TDSP). You can look online to report an outage and find the appropriate contact telephone numbers.

It’s a good idea to write the number down somewhere safe before an incident. You may not be able to get online during a power outage if there’s no electricity to power your Wi-Fi router and computer.

How to Find Power Outages in Your Area?

Assuming you can still get online, several websites provide real-time information about occurring power cuts with outage maps. One such is poweroutage.us which offers a nationwide picture and the possibility to zoom in to individual states and counties.

You can contact your electricity utility and ask about other outages in the area, as well as monitor their social media pages for announcements. Listening to local radio and associated press outlets will also keep you in the loop.

Location of Power Outages in the United States

Every state in the U.S. has different power outage levels and durations thanks to diverse geography, energy supply mixes, and the number of customers.

What Areas Have Power Outages?

Power outages vary across the United States and some areas have more power outages than others. Between 2010-2019, the Northeast region had the most outages (329), followed by the Southeast (282), and Midwest (203).

We can see significant increases across almost all regions comparing major weather-related outages from the 2000-2009 decade with the following 2010-2019 decade.

What States Have Power Outages?

Every state suffers power outages in some form, whether it’s pre-planned outages for maintenance, accidental, wear and tear, or weather-related.

Between 2015 and 2019, Maine led the way with 3.9 outages a year. Maine residents suffer the most frequent and some of the most protracted power outages in the United States at 14.1 hours average outage time.

Why Does California Suffer Power Outages?

California has a warm climate. During its hot summers, there are high energy demands for power-hungry devices like air conditioning.

The state has been adapting to new environmental laws that have seen a shift in its energy source mix. Renewable energy sources are gradually replacing fossil fuels like natural gas in electricity production. In 2019, renewables accounted for 31% of California’s electricity generation, some 10% from wind, 12% from solar panels, and 5% from geothermal energy.

On hot days, solar panels work well, but if there is no breeze to power the wind turbines, then not enough electricity reaches the demands for air conditioning, fans, and other needs. These periods of heavy demand coupled with less supply result in power outages.

Why Do Squirrels Not Get Shocked On Power Lines? 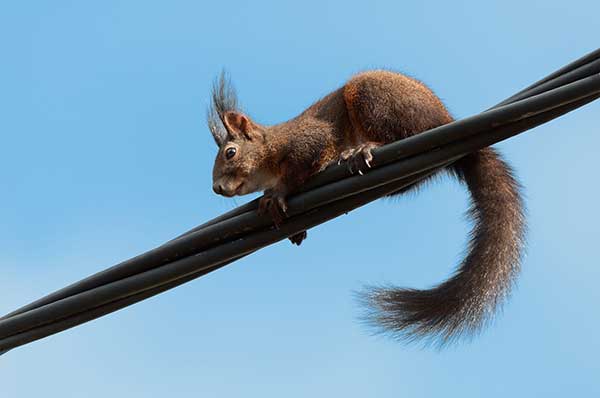 It’s not uncommon to see squirrels scampering along power lines, and birds love perching on them, too. But why don’t they die?

Power lines are generally made of aluminum or copper. These two materials are very conductive and allow electricity to pass easily through them.

It’s the same with a bird perched on a wire — the electricity travels more easily along the power line than through the bird’s body. Essentially, the electricity ignores the animals.

There are exceptions to these rules, though, which is why power lines are so dangerous and why only professionals should approach, climb, or touch power lines. If the squirrel or bird were to touch a lower voltage wire or something grounded, the current would flow through them, and death would soon follow. It’s good to know how electricity works!

Remember, never climb, touch, or interfere with power lines or electricity supply. If you see a downed line, call your electric utility immediately.

Power Outages in the Future

Power outages are increasing in frequency across the U.S. as extreme weather events become more common because of global warming. These extra outages run parallel with growth in electricity and expansion in renewable energy sources.

A combination of unforeseen weather-related outages and dips in supply means that outages — short or long — may become more the norm in the coming decades unless we learn how to conserve energy better now.