All the energy in the universe is either potential energy or kinetic energy.

The interaction and definition of these two energies are vital to our understanding of the world around us. Let’s take a look at what potential and kinetic energy mean, the relationship between them, and some examples of each.

What Is Potential and Kinetic Energy, and What Are Their Differences?

Potential energy is stored energy. An object has a measurable amount of potential energy depending on where it’s located and how it relates to other objects around it — the energy of position.[1]

An apple on the floor has very little potential energy. Lift it to the top of a skyscraper, and suddenly it has a lot of potential energy. It can fall to the ground under the force of gravity. It can also interact with other objects on its descent, such as striking a flying bird or landing on a car roof and damaging it.

Both of these energies are measured in joules. Energy is never destroyed or lost when changing from potential energy to kinetic energy — it is merely transformed from one energy type to another. This is known as the law of conservation of energy.[2]

What Is the Relationship Between Potential and Kinetic Energy? 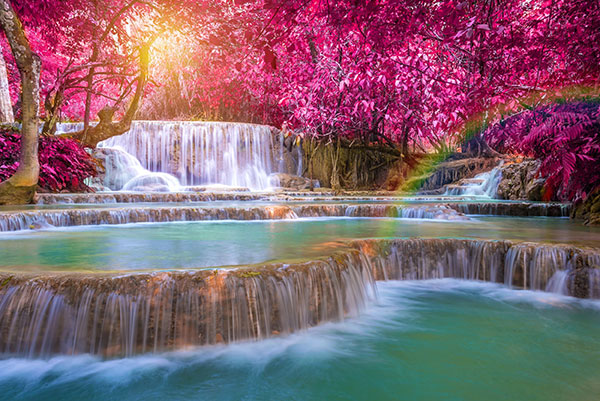 A pendulum is an excellent example of this relationship. As the pendulum swings ever higher upwards, its potential energy increases until it reaches its optimum at the highest point of the swing. At the top of the arc, the potential energy turns into kinetic energy as it swings back down.[4]

What Are Examples of Potential Energy?

The gravitational force of the Earth causes gravitational potential energy. When a person jumps from a high dive board, they land with much force (and a splash) into the swimming pool below.

This is the same for apples on trees, bikes on top of a hill, a roller coaster waiting to descend, and a skydiver in a plane — all examples of the potential to do an amount of work.[5]

Elastic potential energy occurs when you stretch or compress something. A rubber band left on a sideboard has little potential energy. If you pick it up and stretch it, you have increased its potential to do some work. 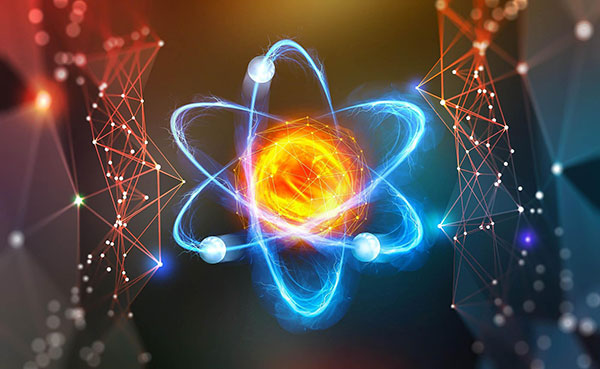 Having defined the main types of energy, we can look at more specific examples and deduce if they have kinetic or potential energy.

What Is the Potential Energy of an Electron?

Atoms are made up of protons, neutrons, and electrons. Atoms can transfer potential and kinetic energy.

An atom has a nucleus, and electrons orbit that nucleus, which is kinetic energy. Suppose we apply energy or pressure to the atom. In that case, it increases the electrons’ kinetic energy and they start to move more quickly. Eventually, the electrons jump out into a wider orbit of the nucleus. This electron has now stored this energy, this potential energy.[7]

An electron’s total energy is the sum of its kinetic and potential energy.[8]

For more details, consider this formula[9] for calculating the potential energy of an electron.

Is a Battery Kinetic or Potential Energy?

Batteries are a form of electrical potential energy. They produce electrical energy via a chemical reaction that occurs when positive and negative charges are separated.[10]

When you turn on a battery-operated device, its potential energy stores of chemical and electrical energy are released and become other kinetic energy forms. When turned on, a handheld torch releases light energy and thermal energy, a form of kinetic energy. A battery-powered singing and cycling toy monkey atop a bike will produce mechanical energy as it cycles around, and sound energy while singing its song.[11]

Is Electrical Energy Potential or Kinetic?

Electrical energy can be potential or kinetic energy. It results from the flow of an electric charge. As discussed, energy can be seen as the work required to move an object or subject it to force. For electrical energy, this force, energy, or “work” is the electrical attraction or repulsion between charged particles.

The current of electricity most commonly talked about occurs when these charged particles travel through a wire.

Like a battery, electrical energy is often potential energy until some force or is applied to make the charged particles do some work and become kinetic energy. When you switch on your light at home, the potential energy travels down the wire and is converted into light and thermal energy.[12]

It’s enjoyable to think about the conservation of energy and how, for example, renewable energy like wind power takes energy from wind and converts it into usable electrical energy for our homes.

Is Sound Energy Potential or Kinetic?

Sound energy comes in both potential and kinetic energy forms. Sound energy is released by vibrating objects in the form of a wave.[13]

An excellent example of sound energy is a tuning fork. When it lies on the table, it has the potential to create sound energy, which is potential energy. Once you strike it, it vibrates and emits sound waves. These waves oscillate and travel, which is kinetic energy.

Sound travels around four times faster in water than in air. At sea level, the speed of sound is approximately 767 miles per hour (1,230 kilometers per hour).[14]

Is Thermal Energy Potential or Kinetic?

We need to stay at a molecular level to understand that thermal energy is also potential and kinetic energy. All matter, made up of atoms and molecules, is always moving. They have potential energy. Whenever a substance heats up, the molecules and atoms within move more quickly, banging into each other and releasing thermal energy as heat.[15]

Think about a kettle boiling. The water molecules move faster as the water heats, and this movement is kinetic energy. When the water boils, its steam moves. The thermal energy released from the atoms and molecules has produced kinetic energy.

More examples include the heat from an electrical heater or when you put food in the oven to bake; when you put cold milk in a hot drink like tea, some of the tea’s thermal heat is passed to the milk.[16]

Is Radiant Energy Potential or Kinetic?

Radiant energy is a form of kinetic energy. It is the energy of electromagnetic waves that can travel through space.

The sun is a vast source of radiant energy on Earth. For example, plants absorb electromagnetic waves and, via photosynthesis, produce their food. When the sun’s radiant energy touches our skin, the waves make our skin’s molecules move faster, and we feel warmer.[17]

We can see radiant energy waves as light energy — the only form of energy the human eye can see. Radiant energy’s magnetic waves can also be invisible, such as X-rays and radio waves.[18]

It’s time to look at more specific examples and names for different types of energy.

There are six primary groups[19], some of which we have examined already:

We recognize nuclear and electrical energy when choosing electricity suppliers for our homes, for example.

What Is Chemical Potential Energy?

Every day we use the chemical potential energy in food to give energy to our bodies. We eat food (a compound or element), and our digestive system (chemical process) turns the potential energy of the food into chemical energy. We can then do work with this energy.[22]

Combustion energy does something similar to gasoline. The chemical process splits the complex gasoline molecule into smaller molecules (carbon dioxide and water). The energy released produces heat, which powers the now moving car, the car’s movement being kinetic energy.[22]

Two rocks — one big, one small — balancing on a 100-foot cliff edge are good ways to think about gravitational potential energy. This potential energy is defined as the energy an object holds relative to its vertical position. It increases as either the height or the mass of the object increases, or both. This is due to the Earth’s gravitational field.[23]

Similarly, two identical rocks can have different levels of potential energy. If one is 100 feet up and the other is at 500 feet, the higher rock has more potential energy because it has further to fall.[24]

The Science of Energy: 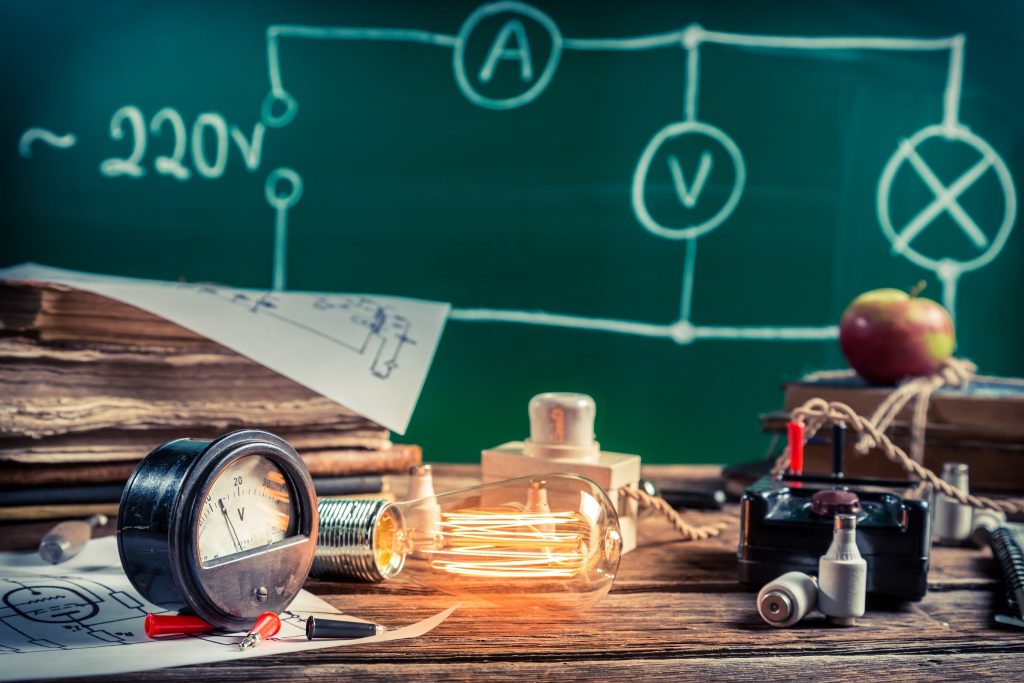 The principles of energy, based on Newton’s Laws, have helped us understand the world around us as well as the universe.

What Is Potential Energy in Physics?

Potential energy is the stored or latent energy in an object at rest. It’s fundamental to many physics-related concepts because its laws hold true on any level, from the planetary to the atomic level.

The potential energy of an object is measurable. The amount it has depends on where the object is located — its energy of position — and the mass of the object.

Many objects transform their potential energy into kinetic energy.

What Is Potential Energy in Chemistry?

Chemical potential energy is released when atomic bonds stored in compounds and elements are broken via chemical processes. This chemical energy is then used in other ways, in what is called work. Energy and work are essentially the same things — work is energy in motion.

What Is Kinetic Energy and Potential Energy Formula?

Potential energy, or work, is measured in joules, named after James Prescott Joule, an English mathematician whose work created the formula about energy and its transference.[25]

Joule is written with the symbol J in the International System of Units (SI), and the formula is written thus:[25]

If we lift our object from the ground to give it potential energy, the force that would make it accelerate towards the ground is called the magnitude of force (F). Newton’s second law is F = mg.[26]

For further details, you can read more about energy formulas.[28]

Potential and kinetic energy are part of the enormous energy of our universe. They’re different forms of energy, but they are closely linked and are measured using the same units (joules).

Energy is never lost; it merely transforms into other forms of energy. It’s useful to know where energy comes from and how it impacts your day-to-day life when choosing an energy supplier. Ultimately, it helps us comprehend the environment and our place in the universe.