The Most Popular Electric Cars by State

In this day and age, so many are involved in the ever-growing conversation about climate change and air quality that the issue has been catapulted to the forefront of the environmental movement, with no real long-term solution on the horizon (yet). However, the avenues you can take to lead a more sustainable life are plentiful—like investing in an electric car.

But of the dozens of electric vehicles on the market, which ones boast not only high marks in sustainability and function but in popularity as well? How well would your top pick fit into the green-loving crowd around you?

To make that selection process easier, we’ve compiled a list of the most popular electric vehicles by state, based on what Americans are searching for online. We wanted to make it as easy as possible for you to keep up with the environmentally-friendly automotive trends no matter where you drive. 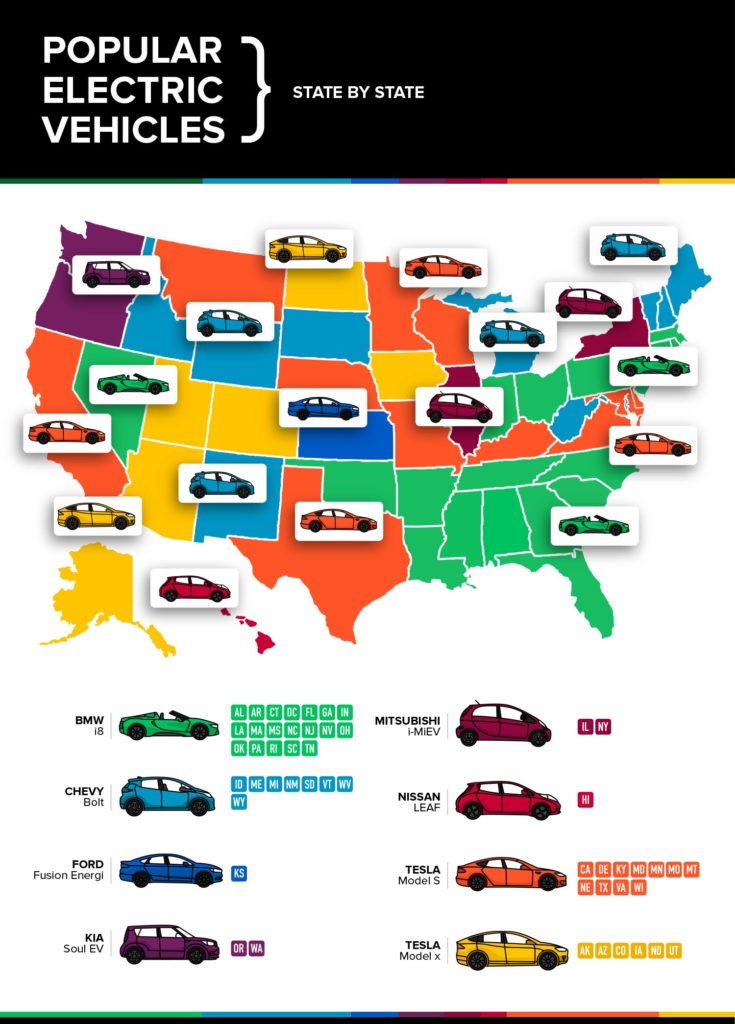 What is an electric car, and why is it a big deal?

For those not too familiar with the concept of the electric vehicle, here’s a crash course. Instead of being fueled by gasoline, EVs run off of energy provided by rechargeable batteries, resulting in no tailpipe emissions and fewer harmful chemicals than the average gas-powered vehicle churns into the air.

The Environmental Protection Agency reports that nearly 28.5 percent of greenhouse gases emitted per year in the United States come from transportation, with the typical passenger vehicle responsible for 4.6 metric tons of carbon dioxide per year. And with approximately 260 million passenger vehicles operating in the US, that’s over a billion tons of carbon dioxide belching into just the United States’ atmosphere each year, circulating through the very air we breathe.

The benefits of electric cars go the extra mile.

In the MIT Technology Review, James Temple noted that “…Arguably the biggest environmental issue we face today is climate change. The big promise of EVs is that they don’t emit carbon dioxide, particularly if they’re charged with renewable sources, the way that combustion engines do.” The average EV driver uses 6,100 fewer gallons of gasoline throughout the vehicle’s life, drastically reducing their carbon footprint.

In addition to keeping the haze of pollution out of the air, EV drivers keep more money in their pockets. An electric vehicle can save you an overall average of nearly $13,000. Think of all the things you could do with that chunk of change!

So what’s the draw of the top electric cars?

What makes certain EV models dominate over others? Is it a feature-packed resume? Pride in a particular brand? Or a sleek, progressive design?

For those who are keen on the BMW i8 (the sweeping preference of the South and most of the East Coast), it could be the sophisticated, sporty design and 3-cylinder Turbo engine that appeals to the plethora of Daytona enthusiasts in the region. Or perhaps it’s the four driving modes (Eco Pro, Comfort, Sport, and eDrive), which provide optimum performance through many different climates and types of terrain.

Drivers traversing rugged, mountainous landscapes in states such as Utah, Arizona, Montana, Minnesota, and Alaska might find the durability, extra seating and storage space, and incredible range (over 300 miles on a full charge) of the Tesla Models S and X more enticing than the fancier-framed BMW i8. Who could say no to a road trip-worthy EV?

There’s a good chance those seeking economy and practicality made the Chevy Bolt the top EV in places like Idaho, Wyoming, South Dakota, New Mexico, and Maine. With a 250 mile range on a full charge, it’s easy for locals to explore the beauty in these states while also enjoying the benefits their car has on the environment around them.

Then there are the outliers—the states scattered here and there who opt for different, lesser-known EV models. While California, like its population, is a melting pot of all the electric cars, the Pacific Northwest favors the Kia Soul EV; practical Kansas elects the Ford Fusion Energi, and New York and Illinois, both states with major, densely populated cities, are more interested in the Mitsubishi i-MIEV, a model that was actually discontinued in 2017. So while some top-selling electric cars prove dominant in certain regions, there really is no accounting for taste across the board. 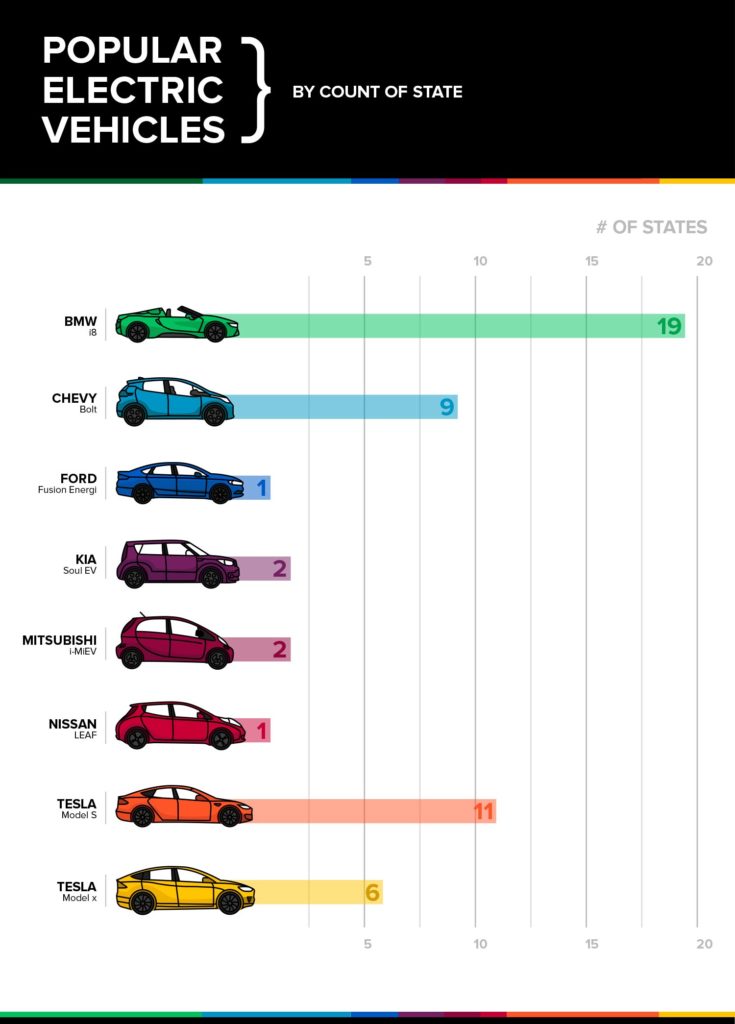 Saving the planet is an ambitious task for one person. Driving an electric vehicle? Much more manageable. As the popularity of electric cars increases each year, so does the awareness of how they affect the environment. It’s not hard to take steps toward living a more energy-efficient life or to listen more closely to the conversation as we work toward a more sustainable future.

As the map above can attest, America’s interest in EVs is piqued, and that is a start.