Everything You Need To Know About Ceiling Fans 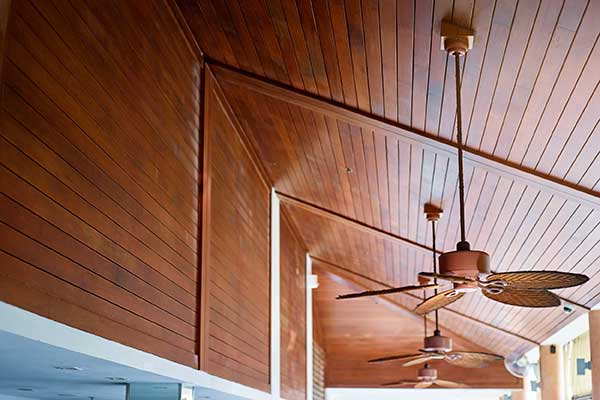 Every space requires a different type of ceiling fan, so we’ll guide you through the jargon of blade pitch, hugger, and downrods to help you understand which fan best suits your needs.

Step into the expansive world of ceiling fans, and you’ll discover which fan to buy and how best to use it.

How Do Ceiling Fans Work?

A ceiling fan’s primary purpose is to keep us cool. It doesn’t cool the air temperature — we feel cooler because the fan moves the air around us, a process called evaporative cooling.

Evaporative cooling works like this: A cold day will feel even colder if there’s a breeze because of the wind chill factor. The same thing happens if we sweat on a hot day and we put the ceiling fan on — the moving air provides a breeze, which acts the same as wind chill, helping to cool us.

What Types of Ceiling Fans Are Available?

In other words, what type of ceiling fan do I need? When you open a ceiling fan specialist website, the first thing to notice is the sheer variety of ceiling fans. There is everything from the ubiquitous white ceiling fan all the way to chandelier ceiling fans and plenty in between. Before considering aesthetics, there are some initial, practical considerations:

You should also consider the energy efficiency, the living space for the fan — dining room, bathroom, patio, etc. — and whether you require a remote control.

Once you’ve looked at these practical elements, consider technical specifications to ensure your fan not only looks great but serves its purpose. Let’s look at mountings first.

What Types of Ceiling Fan Mountings Are There?

A ceiling fan must be at least seven feet (2.13 m) above the floor.

Choosing a suitable mount will mean successful ceiling attachment. The next step is to select the correct blade.

What Type of Blades Are There on Ceiling Fans? 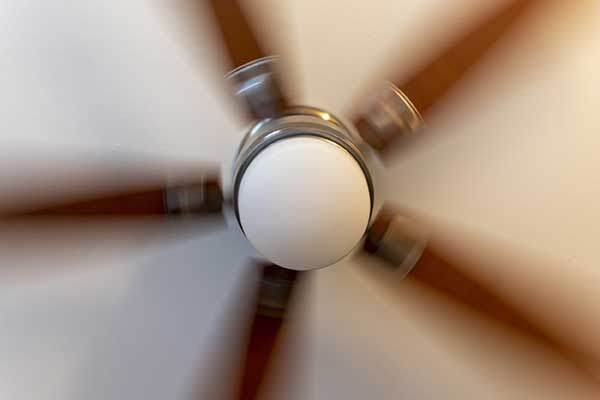 Blades are probably the most technical part of your ceiling fan purchase. You’ll need to think about how many blades, the blade pitch, and the motor.

Many ceiling fans have four or five blades. The general rule is the more blades on a ceiling fan, the quieter it is, the less air circulates, and the more a motor needs to work to spin it because of the extra blade’s increased drag. Most industrial fans, such as wind turbines, have just two or three blades so that they can move as fast as possible.

The blade pitch, or the angle of the blades, affects a fan’s airflow. Most modern ceiling fans have a blade pitch of 10-15 degrees. The lower the pitch number, the flatter the blade, which means less energy is needed to move the blades, but ceiling fans can wobble if you spin flatter blades at higher speeds.

As the blade pitch increases, so does the drag, and the motor needs to work harder to spin the fan. Flatter blades moving at high speeds move less air than steeper blades at a lower speed. If you turn a high blade pitch ceiling fan (with a 15 degree pitch) at full speed, papers and other objects start moving around.

Blade size varies, too. With a longer blade, more air will circulate, and the fan will need a more powerful motor to spin the blades.

Motors have varying rotations per minute or RPM. Ideally, select a fan with six separate RPM settings to give maximum speed options, although three speeds should be sufficient. It’s usually better to have a fan constantly working at a slower speed than working in bursts at a faster speed.

What Size Ceiling Fan Do I Need?

Remember to measure the distance between the room’s floor and ceiling so you can work out the length of any required downrod.

Huggers — low-profile ceiling fans or flush mounts — can be attached next to the ceiling in rooms with ceilings lower than 9 feet (2.75 m). Use a downrod if you have a higher ceiling; you want your fan’s lowest point to be at least 7 feet from the floor.

Why Does a Ceiling Fan Make Noise?

A correctly-functioning ceiling makes noise because some of the blades’ kinetic (moving) energy turns into sound energy.

It may be time to perform maintenance if your ceiling fan starts to make more unusual or louder noises. Common problems include warped or damaged blades, incorrect hanging, and motor problems. You need to keep your ceiling fan and its blades clean, too. Dust and dirt can affect a fan’s balance, causing it to shake and make noise.

What Does a Fan’s Efficacy Tell You?

New ceiling fans in the United States come with an efficacy or efficiency rating. A fan’s efficacy represents how much airflow you get — measured in cubic feet per minute (cfm) — for the electricity used to power the fan, measured in watts.

The higher the cfm, the more efficient the fan. Generally speaking, the longer the blades, the higher the cfm, and the lower the speed you run the fan, the higher its cfm, too. It’s better to install appropriate, large-bladed fans and run them at lower speeds to conserve energy and keep bills lower.

What Is the Most Effective Ceiling Fan?

The most effective ceiling fan is very subjective because each is designed for varying purposes. Energy-saving ceiling fans are energy-efficient if correctly installed in an appropriate room — you wouldn’t install an outdoor ceiling fan in the living room, for example.

The Spruce has produced a Top 10 list of its best ceiling fans, covering various brands. Energy Star has created a list of the most energy-efficient ceiling fans, too.

How Much Electricity Does a Ceiling Fan Use?

Ceiling fan labels show the watts it uses. The wattage can vary because it depends on what speed you use on the ceiling fan.

If we look at the Monte Carlo Vision 84 fan, its watt consumption varies from 6.9W (low speed) to 30W (high speed), but many ceiling fans need around 50-80W to function. We can work out how much electricity that uses, measured in kilowatt-hours (kWh).

How Much Does It Cost to Run a Ceiling Fan?

A ceiling fan’s running cost depends on its wattage, speed, and price of electricity.

According to the Energy Information Administration (EIA), the United States’ average price per kilowatt-hour (kWh) in December 2020 was 12.80 cents per kWh. So 1.16 kWh x 12.80 cents = 14.85 cents to run the Monte Carlo non-stop on a low setting for a week. An 80W ceiling fan would cost $1.72 in the same situation. The overall cost depends on your energy supplier’s electricity prices.

Is a Ceiling Fan Cheaper to Run Than Air Conditioning?

Heating and cooling homes account for 47% of their energy use. Air conditioning units account for around 6% of all electricity used in the United States.

Ceiling fans use a lot less energy than air conditioning and are a lot cheaper to run. You may be able to save more money by comparing electricity rates, too.

Which Way Should I Rotate My Ceiling Fan?

Most ceiling fans have a reversible motor, so that you can turn the blades clockwise and counterclockwise.

During the summer, rotate your ceiling fan counterclockwise, making the airflow push downwards, creating a cool breeze. In winter, spin the blades clockwise for a gentle updraft to recirculate heat (which rises) back down into the room.

According to Energy Star figures, ceiling fans run more efficiently at lower speeds. Airflow is measured in cubic feet per minute (cfm) compared to the amount of electricity used to power the fan. The higher the cfm, the more efficiently the fan is running.

As the name suggests, a bladeless fan is a fan that provides airflow without visible blades and emits air from within a ring-like hollow. This glam new invention, from James Dyson, has added a unique aesthetic to home decor.

Do Ceiling Fans Save You Any Money If You Have Air Conditioning? 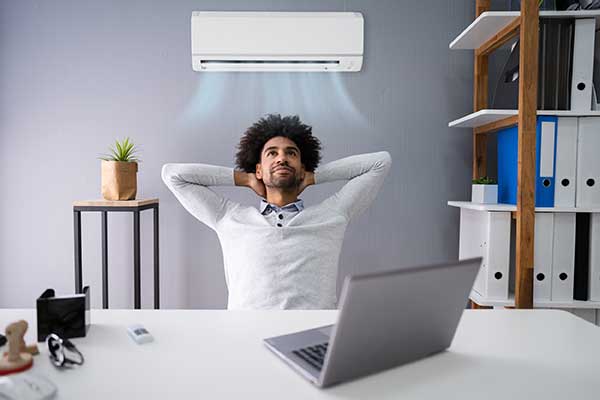 Because ceiling fans use a lot less electricity than air conditioning, this will save you money on your electricity bill. Be sure to rotate the ceiling fan counterclockwise in summer and always turn a ceiling fan off when you leave the room.

If you use heating in the winter, your ceiling fan can again help save money on bills. Spin the ceiling fan clockwise, and it will recirculate warm air that has risen to the ceiling and push it back down into the room.

Information About Buying a Ceiling Fan

There are still several considerations to keep in mind before making a ceiling fan purchase and choosing between that matte black or brushed silver finish.

You need to be 100% certain of your room size, measurements, and blade requirements if you decide to buy online. Going to a shop will give you a better chance to gauge the size of fans and their final look, and you’ll be able to get the sales staff’s expert opinion.

Installing your ceiling fan is of utmost importance, too. Ceiling fans need to be wired into your junction box — if you’re unsure about it, ask an expert. Some ceiling fans operate by remote control, others by fittings in your light fixtures or on walls. Some smart ceiling fans use WiFi to work in conjunction with your cell phone or operate with an Amazon Alexa or Google Home setup.

If you buy a ceiling fan with a light, you need to consider how many other light bulbs illuminate the room to ensure comfortable lighting.

There are many shops, both physical and online, offering ceiling fans for sale. Some are fan specialists, and others provide a variety of products at low prices.

If you are unsure about what to buy, visit a specialist for professional advice. Buy direct if you’re 100% confident you have the correct and appropriate fan for the room.

There are also many famous brands, from Hunter to Minka Aire and Fanimation, all creating chic and glam options. But, before you choose a brand, consider replacement costs. Some brands’ fittings mean you must buy their light kits with their ceiling fans, whereas other brands’ ceiling fans work with universal light kits.

Our Guide To the Best Ceiling Fan

Buying the right ceiling fan for your home is an important and considered choice. It’s not just aesthetics or buying the fan with the longest blades or most potent motor. You also need to install the fan properly and know how to use it correctly to make the most of your purchase. It also provides a useful “take stock” moment to analyze your electricity bill and possibly consider a new energy plan.

Now that you know everything about ceiling fans, you can shop with confidence. Start saving energy while keeping cooler or warmer, using your new ceiling fan