A Complete Guide to Protecting Your Home From a Power Surge 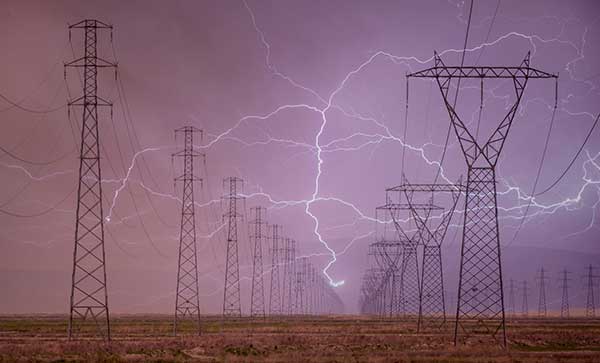 To prevent a potential device disaster, let’s look at the best protection for your home and electronic gadgets from power surges of all kinds. As you’ll soon learn, a little investment goes a long way to protect you and your equipment.

What Is a Power Surge?

The standard household wall outlet in the United States typically supplies 120-volt alternating current (AC) power. An alternating current is as it sounds — the current fluctuates, or alternates, between 0 and up to 169 volts. Most electrical appliances in the U.S. operate perfectly within these fluctuations.

A power surge, also known as a voltage surge or transient voltage, occurs when the electrical current exceeds 169 volts, often for a very short time (as in, millionths of a second). However, this brief voltage excess can damage electrical devices. Power surges happen no matter where you live.

How Do Power Surges Cause Damage?

The voltage boost delivered by a power surge can cause an arc of electrical current within electrical devices. The arc generates heat within the device, which can cause damage to its circuit boards and other components.

Smaller surges can happen, too, such as when you turn on your HVAC. These may be damaging your unit one small step at a time, then suddenly one day, it may mysteriously stop working as one final surge shorts the circuit. These barely noticeable, smaller surges can reduce a device’s lifetime by many years.

On the other hand, lightning strikes provide major power surges, which can cause a lot of damage instantly.

How Do Power Surges Happen?

Power surges happen in a variety of ways.

The most spectacular is from lightning strikes during storms. The electricity from the lightning can enter your home via TV cables, telephone lines, or an incoming electrical line. Lighting sometimes surges through power lines into your home. There are around 20 million cloud-to-ground lightning flashes every year in the 48 contiguous states of the U.S., each containing from 100 million to 1 billion volts.

Power surges can happen within the home, too. High-powered, large appliances like air conditioner units and refrigerators use a lot of power when being switched on and off. Sometimes, this power demand upsets the whole house’s flow of electricity, causing small, internal power surges.

Utility companies sometimes bring about power surges as well. The companies may be switching supplies to the power grid or attempting to clear a fault. Supply faults are a common cause of power surges. They happen, for example, when tree limbs touch power lines, causing a momentary outage to the electrical system. Utility companies can cause a power surge while correcting these faults.

How Often Do Power Surges Occur?

It’s impossible to know accurately how often power surges occur. Many smaller power surges occur inside a home, while more powerful surges happen during storms and lightning strikes. These larger surges can also cause power outages and are one reason why U.S. companies are investing in the national grid.

Power outages are different from power surges; read more in our detailed guide to power outages.

What Are the Warning Signs of an Overloaded Electrical Circuit? 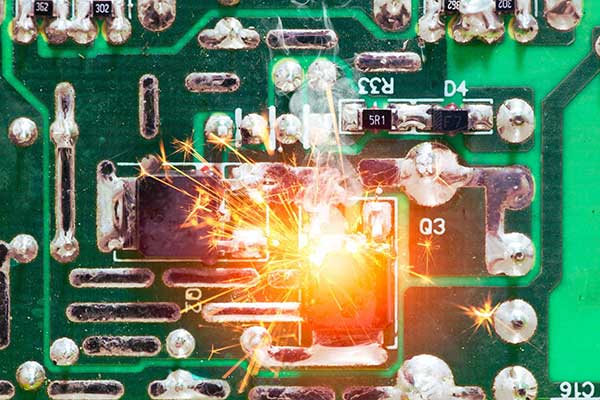 What Are the Signs a Power Surge Has Happened?

There are several signs an appliance has experienced a power surge:

What Should You Do After a Power Surge?

Power surges can bring havoc — and expense — to homeowners and businesses alike. There are some steps to cover after a power surge. We’ll also look at what you can do to better protect your home and its appliances before experiencing a power surge.

Who Pays for Power Surge Damage?

There are three potential sources to pay for power storm damage: the utility company responsible for it, an insurance company, or you.

Utility companies are often responsible for power surges during their day-to-day electrical service provision and maintenance. Most utilities will accept responsibility for damages caused by their negligence. However, they make (many) exceptions for events “outside” their control. Every utility company and circumstance is different. You may need to check with a lawyer if damage caused by a utility company power surge could be paid for by that company.

Many people turn to home insurance to cover power surge damage costs, but some insurance policies do not cover power surges, or coverage depends on how and who caused the damage. Coverage may require specific prevention measures in place, such as surge protection devices and suppressors. Be sure to read your home insurance terms and conditions carefully before taking out the policy and ask the insurers if you are covered and for how much and under which circumstances.

It may well be you are responsible for paying for power surge damage to your home and appliances. That’s why it is essential to keep your whole house and all your devices protected from power surges.

Your home insurance policy may cover power surge damage costs up to specific amounts and as long as certain conditions are met. These conditions may include how and who caused the damage, whether sufficient power surge protection measures were in place, and more.

You must read your home insurance terms and conditions carefully before taking out any policy. Ask the insurers if you are covered for power surges, for how much, and under which conditions. Many insurers have a specific power surge, personal property, or equipment breakdown coverage policy that may cover your needs. Carefully check claim limit amounts, too. Some insurers won’t cover surge-protected homes, either, so you do need to check every policy carefully.

You can do a lot to protect your home and electronic devices before a power surge event. For instance, you can minimize the need to rely on an insurance or utility company claim by outfitting your home with proper surge protection.

How Do You Prevent a Power Surge From Damaging Your Appliances or Electronic Devices?

There are many simple steps to help protect your home and electrical appliances from power surge damage. If you’re unsure about any of these, consult a fully qualified electrician to guide and help you.

Before looking at appliances, it’s essential to make sure your home doesn’t have faulty wiring. A qualified electrician can help assess your home’s wiring.

The next step is purchasing good-quality surge protectors, also known as surge suppressors or surge diverters. These surge protectors channel power surges into the ground rather than into your electronic devices or through your home’s electrical system.

Keep in mind that some power surges are so powerful, such as lightning striking your home, that even taking multiple protection steps won’t protect you from the surge.

What Type of Surge Protectors Are There?

Whole house surge protectors are also known as panel-mounted surge suppressors. These offer “point of entry” protection, fitted where the electricity supply enters your home, by the fuse box. These protect your home’s appliances from lightning strikes and power surges from the power grid, thus preventing electrical surges from flowing through all your building’s wires and cables.

Power strips with surge protection are commonplace in homes. These plug-in surge protectors are also rated in joules. You must ensure that the power strip can cope with the electrical demand of the appliances you will use with it. Prices vary, with higher quality and higher joule models usually costing more. Not all power strips offer surge protection, so always check carefully before buying.

Transient Voltage Surge Suppressor (TVSS) is also known as an SPD, or surge protective device. They are hardwired directly into your home’s wall outlets. In the event of a power surge, a TVSS or SPD protects anything plugged into it. Some models will flash or make a noise to indicate a power surge.

How Can Power Surges Be Prevented?

You cannot prevent a power surge from happening. You can, however, protect your home and appliances against the damage that power surges can cause.

The best way to protect your appliances is to:

Are All Power Strips Surge Protectors?

A power strip is basically the same as plugging your appliance into a wall outlet. It may feature a circuit breaker (switch) to turn off power to all its outlets but it offers no protection against power surges. These power strips are usually cheaper than those with surge protection.

How Do You Choose the Right Type of Surge Protector?

Power strips with surge protection, or surge protectors, are rated by joules. Speaking generally, the more joules it has, the more devices it can handle.

Joules are important when thinking about what you will plug into the surge protector. You need more joules for power-hungry appliances like home theater systems and air conditioners.

Make sure there’s enough space for all the plugs. Appliances plugs come in many shapes and sizes, and you want them to fit. Also, take into account cord length so you can plug in the appliances you wish while avoiding “daisy chaining” surge protectors by plugging one surge protector into another.

Look for surge protectors that offer a warranty. If a power surge damages your appliances, you may be able to claim money from the surge protector company.

Industry workers recommend a surge protector with a clamping voltage of 400V or lower and a response time of less than one nanosecond for the best protection.

In practice, this means installing a whole house surge protector to cover the incoming electrical power line, incoming telephone line, cable TV, and satellite dish cable. You can install one system to cover all these or an individual protector for each line. Whichever you choose, this covers the building’s entry points and will help reduce any outside surge that runs into your home’s electrical system.

Keep You and Your Home Safe From Power Surges

Power surges can cause a lot of damage to your home and electronic devices. Installing surge protection measures can protect your property from both short-term damage and long-term wear.

Investing in surge protection systems can save you money, keep your electrical devices running safely, and bring more peace of mind. It only takes a fraction of a second for electricity to potentially wreak havoc to appliances big and small, bringing expense and hassle in its aftermath.

A little time spent protecting your home against power surges can save you time and money in the long run.