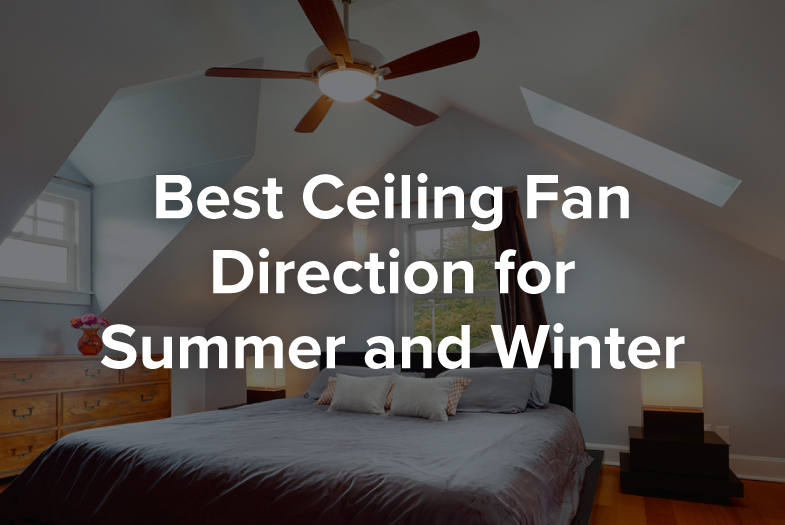 Feeling cooler in the summer and warmer in the winter ain’t rocket science—it’s as easy as changing your ceiling fan direction. In this post, you’ll learn which direction is best for each season and how to change the direction of your ceiling fan, as well as a few other related tips.

Setting your fan to rotate counterclockwise during the summertime can help you feel cooler even though the temperature in your home doesn’t technically change. Increased air flowing directly downward can go a long way toward increasing comfort and maybe even result in some energy savings if you use your air-conditioning unit less.

Using your ceiling fan during winter can help you feel warmer and save on your energy bill, too. Interestingly, setting your fan to spin clockwise pushes warmer air hovering close to the ceiling downward—helping you feel warmer. Don’t get carried away though—most experts recommend using a low fan speed so as not to produce a wind-chill effect.

What’s the best ceiling fan direction for spring and fall?

There’s no definitive recommendation for spring and fall ceiling fan usage. In most of Texas, you’ll probably want to use summer settings (counterclockwise) earlier in the springtime and later into the autumn—just adjust your fan speed according to the temperature. Also, when you switch directions on your ceiling fan during spring and fall, you may want to take the opportunity to clean your fan. According to Today, you should dust your fan every two weeks or so. Even if you’re not quite that neat, a bi-annual cleaning when you switch directions should do the trick.

How do you switch ceiling fan directions?

You may be thinking, that’s great, but I don’t even know how to adjust the direction of my ceiling fan. Don’t worry, it’s simpler than you might think, just:

Most ceiling fans have a switch at the base of their motor. In some rare cases, however, your fan might not have a switch or it might be located on another part of the fan because it was manufactured in a foreign country.

Is a smart ceiling fan worth it?

Selecting the right direction for your ceiling fan is easy and can help you feel more comfortable while you save money on heating and cooling costs. For more seasonal energy-saving tips, check out our other posts on Powerline.